“Tomb Raider” is directed by Roar Uthaug and stars Alicia Vikander as Lara Croft. If you are not familiar with “Tomb Raider,” it’s a video game franchise that started back in 1996 and is still making games today. You play as Lara Croft throughout an action-adventure and puzzler. This is also not the first “Tomb Raider” movie. There have been two before this one starring Angelina Jolie, but that series didn’t last. This movie is more similar to the 2013 “Tomb Raider” game as opposed to the oldest ones. The plot is that Lara is the daughter of an adventurer, and unfortunately, this adventurer has disappeared. Now, Lara must push her own limits once she finds herself on the island where the adventurer, otherwise known as her father, disappeared. 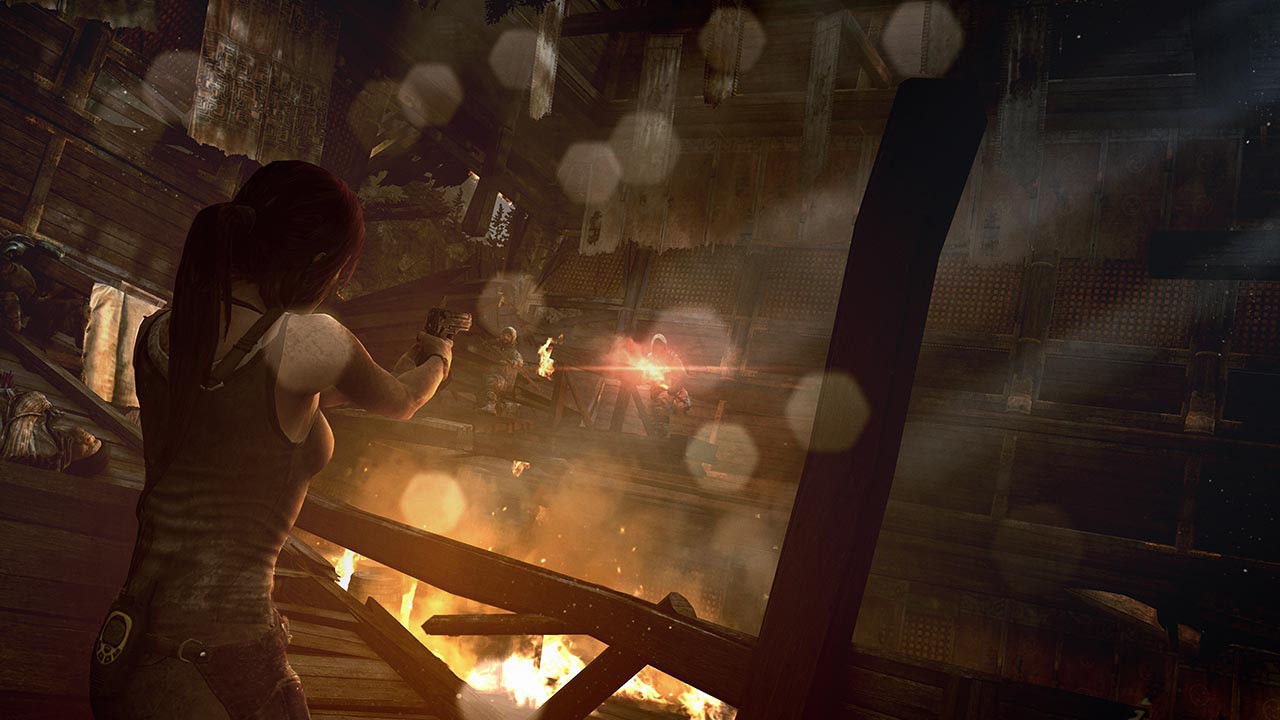 I’ll remind all of you reading right now that this is a video game movie. In Layman’s terms, a movie you should usually avoid. People for years and years have been making several video game movies, and while I can’t really say I’ve seen all of them, heck, I can only say I’ve seen a few, I can say that one of them turned out to be my least favorite film of all time. That “film” by the way, is the 1993 “Super Mario Bros.” movie. When it comes to video game based films, the “Tomb Raider” franchise is no stranger to this. It already had a couple of movies out, but now it has been redone with a different actress playing the main character. I’ve actually seen bits and pieces of “Lara Croft: Tomb Raider” in various YouTube videos and on TV. From what I’ve seen, I know it’s objectively dumb. But if you have the right mindset, it might come off as pure fun. That movie and its sequel seem to have some similarities to the older “Tomb Raider” games, but this “Tomb Raider” film seems to relate more to 2013’s “Tomb Raider” and is a little more serious. This movie feels more like “Wonder Woman” as opposed to say… I dunno, “xXx.” Does the seriousness work in this movie? I gotta say it does. And speaking of things working, I gotta say this movie as a whole works. I didn’t expect this movie to be as good as it was AT ALL. The teaser poster released months back looked terrible, the first trailer looked like s*it, and I was kind of skeptical about the girl who played Lara Croft. I mean, my fondness for her grew over time as I found out she plays Ava in “Ex Machina,” but leading up to this film’s release, I was skeptical of the turnout. But you know what? The quest is complete! We have an above average video game movie! Out of all the video game movies I’ve seen, this is the first I’m giving an above average score to. No you fools, I’m not counting “Tron” or “Wreck-It Ralph,” those were original!

Let’s talk about Alicia Vikander in this movie. I’ll mention once again that this movie is more like the 2013 “Tomb Raider” so with this character, you don’t really see her slinging guns at giant robots or running on walls while on wires, you just see her on an adventure. While I can’t fully compare this film and “Lara Croft: Tomb Raider” side by side, Vikander’s character is a bit more heroic and warrior-like as opposed to Angelina Jolie’s character who might as well be a rock and roll superstar badass chick who makes you accept the fact that she can do literally anything. Here in this movie, you are given moments where you can emotionally attach yourself to Lara. You see her struggles, you feel her pain, and you root for her in just about any circumstance. Also, based on what I recently said, I will bring up that I’m NOT saying I DON’T think this movie’s Lara is a badass, but I’m also saying she’s a different type of badass. I’m not giving what exactly can be called a negative connotation to either character, but Vikander’s the type of badass that is relatable whereas Jolie’s the type of badass you can’t help but wonder what the hell is going to happen.

Another standout character to me in this film is played by Walter Goggins (The Shield, Justified) he goes by the name Mathias Vogel and if you played the 2013 video game you might be familiar with him. There was a moment I was watching the movie and I was reminded of something. You know how every once in a while I do a countdown on a certain topic? One of the ones I’ve planned to do for a long time is my most hated characters in movies. If I actually get around to doing that, Vogel might be a possibility. I can’t say he’ll make it for sure, but based on his attitude and some the s*it he does in this movie, major points goes to him on that, making him climb up the charts.

Also speaking of video games, depending on what you play, you might think of those at times being these epic adventures where you can basically accomplish anything, even if it’s just by the smallest of seconds. This movie’s kind of like that too. You almost have to suspend your disbelief and just let certain things go at times. If you don’t play a lot of video games, you probably don’t know what I’m talking about. Just imagine someone trying to get from one side to the other and there’s no bridge or walkway. So you have to go back, and run as fast you can to the edge of the side you’re on, with the slightest amount of hope that you’ll make it to the other side. It looks like you’re gonna fail, you’re going to fall down a neverending abyss, but with your own two hands, you make contact with the edge of the other side, and you’re struggling to actually “make it over.” It’s just a climb away. With all your might, you climb! It takes ten seconds of your strength and willpower, but you have achieved the right to fight! This movie is like that sometimes. I was able to let it slide because for one thing, it’s based on a video game and video games are like that. But also because there’s a certain limit in my head where I can’t suspend my disbelief any longer, and the movie fails to reach that. So yeah, this movie is based on a video game, and it can technically be called a movie. Awesome! F*cking finally! The umpteenth time’s the charm, but it happened!

In the end, I’d watch “Tomb Raider” again. Some part of my brain would want to give it a 10/10 just because of what it stands for in the video game movie genre. Not only that, but it also exceeded my expectations. Although I’ve got to be real with you, if I give this movie a 10/10 my pants would be on fire. I’m a critic, not a charity operator. Having watched this, I was engaged, I was intrigued, I was connected to the characters, I thought the people behind this film did a good job at adapting the source material to the screen, and I also thought Vikander did an alright job as Croft to my utmost surprise. So with that being said, I’m going to give “Tomb Raider” a 6/10.

One last thing before we close this out, long before this movie released. There was actually speculation all over the place that the role of Lara Croft would end up going to a different actress than Vikander, specifically Daisy Ridley, AKA the “Star Wars” franchise’s Rey. When I heard about this news, I was in instant approval mode. In fact it’s not just me, other people, including “The Force Awakens” co-star John Boyega thought Daisy Ridley would have made a great Lara Croft.

According to an article from The Hollywood Reporter, it turns out that John Boyega has played the 2013 “Tomb Raider” reboot, happened to be aware of the project, and texted Daisy Ridley saying that she could have a real shot at playing Lara if they decide to base the upcoming “Tomb Raider” film on the 2013 remake game.

Daisy Ridley also admitted that at the time she had been in talks to play the character. Although there was no confirmation. There were some loose ends that needed tying up involving the film. The script still needed to be finished for example. When I found out Daisy Ridley wasn’t going to be the next Lara Croft, I was a bit disappointed. Seeing her killer performance in “The Force Awakens” made me think NOBODY ELSE could be Lara Croft. Having seen this movie, not to mention a couple of “Star Wars” flicks with Ridley as the lead role, I guess I can say to myself that I may have just been complaining a tad more than necessary. After all, if Ridley gotten the role, I could have either overhyped the movie just because she’s in it, or have been disappointed just because I mainly see her as Rey. I like Alicia Vikander as an actress, and I ended up highly appreciating her in “Ex Machina,” but if I were on “Who Wants to be a Millionaire?” and you asked me who Vikander was in 2016, I probably would have just been stumped or in need of a lifeline. This movie ultimately continues to make me envision a bright future for Vikander, and I hope she gets some more good roles.

Thanks for reading this review! This week I’ll have a review up for “Mission: Impossible” and hopefully I’ll be able to see “Ready Player One” in a few days. If I do see “Ready Player One” in a few days,  I hope it’s great, and maybe I’ll prove to my pals who apparently think this movie’s going to be s*it dead wrong on the nose. Then again, they didn’t read the book. Stay tuned for that review, my “Mission: Impossible” review, and whatever other content this movie reviewing moron can give you. I want to know, did you see “Tomb Raider?” What did you think about it? Did you see the Angelina Jolie “Tomb Raider” films? Did you play any of the games? Leave your comments down below! Scene Before is your click to the flicks!