“How to Be a Latin Lover” is directed by Ken Marino, an actor with a ton of credits who also directed episodes of various TV shows such as “Children’s Hospital” and “Burning Love.” This movie stars Eugenio Derbez (La familia P. Luche, Jack and Jill), Salma Hayek (Grown Ups, Once Upon a Time in Mexico), Raphael Alejandro (Olympus, Once Upon a Time), Rob Lowe (Parks and Recreation, Wayne’s World), Kristen Bell (Frozen, The Good Place), Raquel Welch (The Three Musketeers, Legally Blonde) Rob Corddry (Hot Tub Time Machine, Children’s Hospital), and Rob Riggle (The Daily Show, The Hangover). The plot for “How to Be a Latin Lover” is that Eugenio Derbez’s character of Maximo is dumped by his 80-year old wife. Because of that, he has to move in with his sister and nephew which leads to the rest of the movie’s events.

I did not see this film in the theater, I managed to find it used on Blu-ray in a store. I knew about this film beforehand, but it didn’t catch my interest. Ah, simpler times. I wasted ten bucks on this film and after watching this, I felt that I’d feel better watching another film that came out this year, “Transformers: The Last Knight.” Why’s that? BECAUSE I GOT TO SEE THAT FOR FREE! “How to Be a Latin Lover” is the epitome of a comedy that doesn’t impress. Rather cliche jokes, a fish out of water segment that was done better in movies like “Elf,” and a tale that at times, makes you question mankind itself. Seriously! There is a point in this movie, where the main character is with a kid he’s formed a bond with throughout the runtime, and he’s teaching the kid how to be sexually attractive. This story wouldn’t be as awkward if the kid were in, say, the teen years, but he’s f*cking ten! TEN! Essentially this kid has a crush on a girl, and I don’t think it’s entirely wrong for the kid to learn to IMPRESS the girl, but not to get her to have sex with him! In a way, it might associate well with the main character’s personality, after all, he was a gold-digger who admired women for their money and physical figure. It doesn’t change the fact that this movie was as awkward as going to a Super Bowl party and thinking it’s soccer.

Eugenio Derebez plays the main character in this movie, well, that is if you can call it a movie. His name is Maximo and he’s basically the s*ittier version of Derek Zoolander. Think about it, he basically has some of the mannerisms, although it’s not exactly the same because his voice isn’t as robotic or striking, but that’s just who he reminds me of. Maximo’s not really a male model either. He’s more of a guy who cares about no one but himself, doesn’t contribute to society as much as other people, and just seems to have sex on his mind a lot. Granted, there’s a stereotype that’s all that men think about, but I can guarantee you not all men show their thoughts on sex. So in a way, you can say he’s also the s*ittier version of Donald Trump (I can’t believe I’m saying that), because Donald Trump actually does s*it. He fired people! He licensed his name to things! And there’s a possibility that he’s part of what’s making Twitter thrive today.

Staying on the topic of things that men often think about, let’s talk about Salma Hayek. Salma Hayek plays the character of Sara, who is Maximo’s sister. Her character is overall, pretty pissed that Maximo is staying with her, after all, she has a job, Maximo doesn’t. She’s got money, Maximo doesn’t. I didn’t find her to be the worst character on screen, although she a has a job where she’s just trying to move up from where she stands in the company, but she just can’t get there. This brings perhaps, one of the most forced, moments of comedy, I’ve seen all year! She’s talking with this woman, and the woman says that Sara’s a fine person but she wants someone with “more experience” to take a certain occupational task of discussion. Although before this woman says “more experience,” Sara interrupts her assuming she’s about to say “more experience.” This causes the other woman to say that she must finish her sentence and she needs to get out what she needs to say. When your movie plummets down to a level of comedy as low as that, you know you have a s*itshow on your hands!

There are two kids in this photo as you can see, the one we’re gonna be focusing on is the one on the left, which is the son of Salma Hayek’s character, who happens to be played by Raphael Alejandro. This kid’s name is Hugo. I will say one thing, I did care for this kid more than I did for the main character, but you also have to consider how much of an influence the main character was on him. There was a point in the movie where I felt bad for him in a way, but at the same time, I just couldn’t bear seeing him, or anybody else in this stinking picture for that matter. Also, he did this one science experiment that I saw in his room that basically took up the entire space! For what I recall, this was something he was going to present at a science fair, and I just questioned why it would be in his room given what the experiment was and if it would even make it to the show. It almost crushed Maximo, who was sleeping on an air mattress laid out in this room. It almost reminded of “Daddy’s Home” when the Ford Flex goes through the house. I get the movie’s a ridiculous comedy, but the mind can only go so far in suspending disbelief. Just… have some sanity in this universe.

Kristen Bell is also in this film as a character who appears in a number of scenes. I mean… Why? Is “The Good Place” not giving her enough money? Her character is named Cindy, and she’s a crazy cat lady who works at a yogurt place. Her character reminded me a lot of Holly from “King of Queens,” which if you’ve never seen the show, she’s a dog walker with blonde hair. So both have some sort of connection with animals but the big difference between these characters is that the one in the movie we’re focusing on annoyed the living crap out of me. She felt like a cartoon! She may as well be a female Ghostbuster! This character just felt one dimensional, and I didn’t care about her enough to get to a point where I come across her buttload of cats later on in the picture.

These two characters above are enemies that Maximo meets along the way during this film, as if divorce and a lack of money weren’t enough. The one on the left is named Nick and the one on the right is named Scott. The pair remind me of the henchmen from “Super Mario Bros.: The Movie,” a movie that if you never watched, pretty much suggests that you didn’t have your childhood ruined by a dumbass and his equally stupid sidekick who both go by the last name “Mario” for some reason. The good news is, as characters, I think these two are better than the henchmen. They’re less cartoony. The bad news is, they aren’t good enough. They just spit out standard jokes and they just sound like something that are written by a three year old!

I know that I’m being hard on this film. Although there is a part of me that thinks this movie really could have worked… If it were Opposite Day. I don’t even think there is a way something like this could work. At least one that I can think of. Gosh! This movie probably just made my IQ shrink to a new low! “How to Be a Latin Lover” relies way too much on sexual humor, a lack of realism at times, and things that happen in the movie that could come off as a bonding experience between a wise person and a young person, but just come off as awkward in the end. You guys ever seen “Big Daddy?” The Adam Sandler movie? That movie displays a similar relationship between a wise person and a child. The experienced man wasn’t exactly teaching what’s right to do towards the child, but simultaneously you couldn’t help but admire what’s going on because it was funny and it wasn’t as awkward. He wasn’t teaching “the joys of getting into a girl’s pants,” it was letting the kid make his own decisions, being a brat at the park, how to get Halloween candy in unpredictable manners, stuff like that! Sure, it’s somewhat immature humor but ultimately I can’t help but admire it for working and making me laugh. In fact, if getting a girl to have sex was taught to the child in “Big Daddy,” it would have been even more awkward considering the child in that film was five! 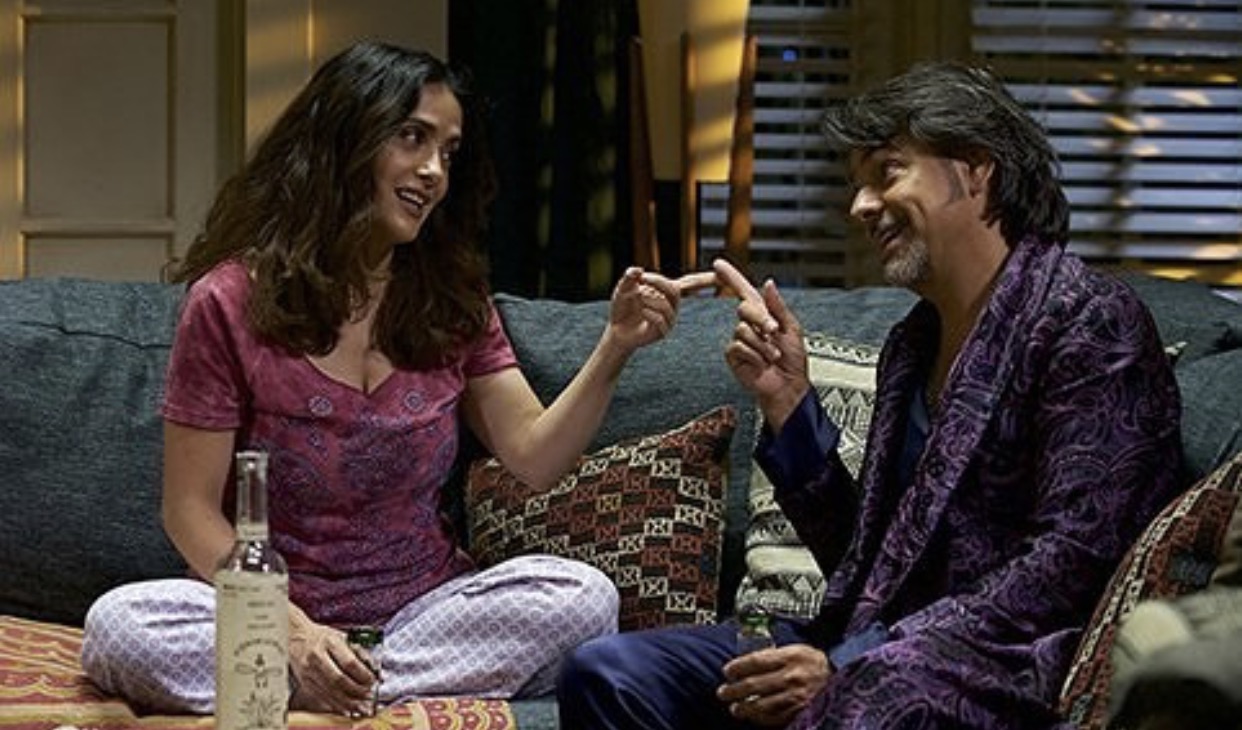 In the end, “How to Be a Latin Lover” has a new hater. As time as passed, I wonder if I’ve seen a lot when it comes to comedy and I just don’t find much of anything funny anymore. Heck! I was one of the people who barely laughed during “Guardians of the Galaxy Vol. 2!” Nevertheless, I think this movie’s crap and I’m going to give “How to Be a Latin Lover” a 2/10. There have been films, like this one, where I’ve seen sexual comedy work. This doesn’t associate with the ones that work. Part of me even wonders why I bought this movie, oh right! It came out this year! I’m seeing as many 2017 movies as I can by the end of the year! What a stupid question! Agh, thanks for reading this review. If you want to see reviews to better movies, I’ll post links to those down below. Be sure to check out my reviews for “Justice League” and “Wonder.” Stay tuned for more reviews! Also, I want to know, did you see “How to Be a Latin Lover?” What are your thoughts? Or what is the most awkward comedy you’ve ever seen? Let me know down below! Scene Before is your click to the flicks!