“Power Rangers” is directed by Dean Israelite and stars Dacre Montgomery, RJ Cyler, Ludi Lin, Becky G, Naomi Scott, Bryan Cranston, Bill Hader, and Elizabeth Banks. This movie is about a group of teenagers who all live in the same town of Angel Grove who find coins hidden around them and eventually receive powers. This discovery leads to them finding a command center with a character named Zordon along with a robot known as Alpha 5 and being encouraged to stop the wickedness of the evil Rita Repulsa. 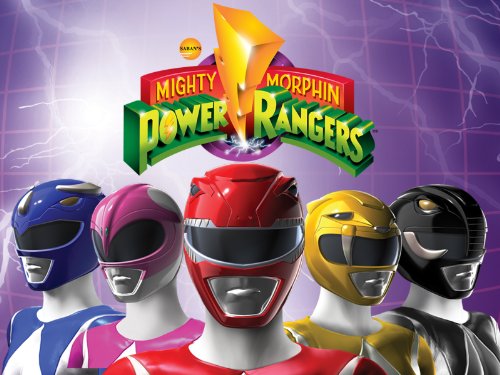 The movie “Power Rangers” is not an original movie, as some of you may already know. I grew up watching some of the shows as a kid, I even caught a couple of glimpses at “Mighty Morphin Power Rangers: The Movie.” I never really watched the original show all that much, but when I was young I always either watched “Dino Thunder” or “SPD,” otherwise known as “Space Patrol Delta,” I occasionally watched “Mystic Force,” but all in all, I didn’t watch that particular series as much. And believe it or not, “Power Rangers” itself isn’t even original, when “Mighty Morphin Power Rangers” started back in 1993 it actually used footage from a Japanese franchise called “Super Sentai,” and when it came to the story sequences, American actors were used to film those scenes. Now over 20 years later, the series is still going and they finally do something for the adult crowd. I mean, I know adults who have watched the kiddy franchise but they know it isn’t really meant for their demographic. In fact I actually know someone in a social media group I’m in called the Nerd Army, I remember they said they watched the Mighty Morphin series once when it was on Netflix and I believe they also watched it as a child and they said they didn’t find much joy in the experience watching it as an adult.

Moving onto the Black Ranger, we have Zack. This character is played by Ludi Lin and he doesn’t really stand out amongst the rangers, but I can’t say I disliked his character. For what the character was, I’d say Lin did a fine job as the ranger and the person behind the mask.

Next up we have Trini, who plays the Yellow Ranger. Out of every ranger in this movie, she was personally my least favorite of the bunch. I mean, I don’t hate her exactly, but I wouldn’t say I was completely fond of her in the beginning. If you watch Trini in the beginning, she doesn’t talk much, but I wouldn’t say that is the actress’s fault. By the way, speaking of the actress, this character is played by Becky G.

Up next we have Billy Cranston, AKA the Blue Ranger. This character is played by RJ Cyler, who was also in “Me and Earl and the Dying Girl,” I have not seen that film, but I heard he was in it. Despite that, I’d say that after seeing Cyler in this movie, this guy has a bright future ahead of him when it comes to acting. Not only was his character likable, but Cyler’s acting method was spot on. I’d also have to say that the Blue Ranger in this movie is actually my favorite of the bunch and I completely relate to him since I have autism.

Last but not least when it comes to the rangers, we have the Pink Ranger, who in person is known as Kimberly. Her character is played by Naomi Scott and I’d have to say that she reminded me a lot of the original Pink Ranger in terms of looks. If you never knew, the original Pink Ranger is played by Amy Jo Johnson, and when the original series was going on, she was apparently a lot of boys’s first crush. In this movie, one thing about this ranger which reminded me of the original Pink Ranger included the hair, it wasn’t as long but it was black so it was similar enough. Another thing you can probably say was sort of a reminder, but I don’t know if it really qualifies as one, is one moment in the movie you see Kimberly taking her top off, she still has her bra on, and she’s diving in water. I say it probably doesn’t qualify as a reminder simply because this isn’t necessarily something the original Pink Ranger did. Instead, I would imagine some boys, probably adults or boys starting to hit puberty fantasized about the Pink Ranger and this, at least from what I’m willing to bet, only considering how I can’t relate to this, may have been an example of one of their fantasies.

Now moving onto characters who aren’t Rangers, we have Zordon. In this movie, Zordon looks MUCH different than he does in the Mighty Morphin series. In the Mighty Morphin series, he kind of looked like the hologram of Oz if he were white and didn’t have jets of fire going off around him. In this movie, he looks like a guy with a bunch of pixels all over him. I’m personally OK with that, and I say that because I know one guy on YouTube I’m subscribed to, Angry Joe, who said in his review for this film that he didn’t like this change. By the way, for those of you who are shocked Bryan Cranston took this role, I wouldn’t completely say I relate to your shock. It’s not the first time he’s done something Power Rangers related. In the Mighty Morphin series he did the voices for Snizard and Twinman.

Alpha 5 is also in this film, and this time around, he’s played by Bill Hader, who you may know commonly appeared in “Saturday Night Live,” and also does the voices of Fear from “Inside Out” and Flint Lockwood in “Cloudy with a Chance of Meatballs.” If you remember Alpha 5 from the original series, he doesn’t look too much different here than he does there. He sounds a bit different, but that’s about as far as it gets. Oh, and yes, he does say “Aye yai yai!” in this film.

Elizabeth Banks is also in this film and she plays Rita Repulsa. This character has been in more than one of the series’ so far, and now she is here in this film. And I have to say that this character TRULY is evil. Banks sounded like she had a lot of fun as this character, and she really knew what she was doing. Just to support that previous statement to you, I’ll even add that she still knows the foreign language the cast needed to learn for this film. Bill Hader even mentioned so in an interview on “Jimmy Kimmel Live.” The more I think about this character, I think to myself, this is who “Suicide Squad’s” Enchantress should’ve been. If there’s anything left to say about Rita, I’d say that she was in the sickest Krispy Kreme Donuts commercial I’ve seen. REMINDER: It’s also the only Krispy Kreme Donuts commercial I’ve seen, but still, there was one shot of her in a Krispy Kreme Donuts shop, it was pretty badass. Like, badass to the point where this should be on the back of the home video covers when the movie releases on formats related to it.

On a little sidenote, two of the original Mighty Morphin Power Rangers have cameos in this film, those two are Jason David Frank, who was the Green Ranger and the White Ranger, and Amy Jo Johnson, who as mentioned recently, played the Pink Ranger. I don’t think I found them in the film, there’s one scene in a jewelry store in which there is someone who looks like Amy Jo Johnson, but my brain is telling me that isn’t her. As far as Jason David Frank goes, I wasn’t able to find him anywhere. 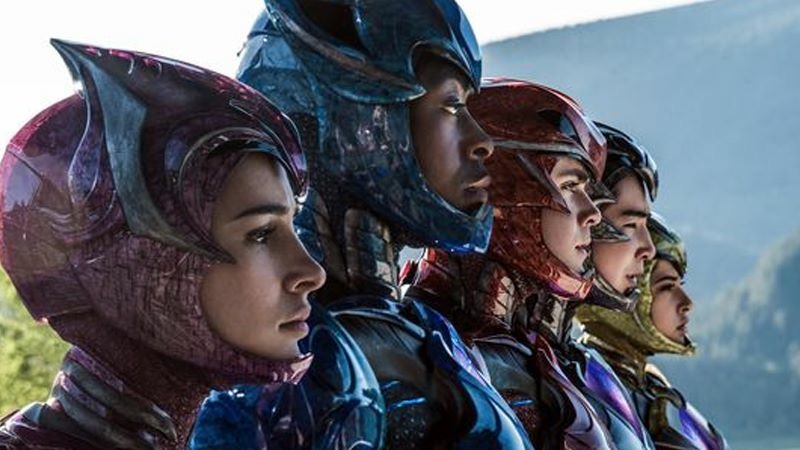 Earlier during this review I mentioned that this film may be the first “Power Rangers” related entity to actually cater to an older demographic. It can still appeal to younger audiences, but adults can still go see this movie without questioning themselves in the process. I say that because of some huge differences between this movie and the shows. If you have seen the shows, you may know the characters often overexaggerate their fighting. I can still remember all of the characters going “Hyah!” or “Hi-yah!” or “Huah!” or something else along those lines. I still heard some of that in this movie, but hearing it in the theater, it wasn’t as audible compared to when I heard it in the TV series’. And its not just the characters themselves that are overexaggerating. This next thing I’ll mention still applies to them though. There is also lots of swooping. I recently watched a video from YouTube user Chris Stuckmann, and he was doing a Hilariocity Review of “Mighty Morphin Power Rangers: The Movie,” and he was mocking that per se by having each one of his arm, hand, and finger movements be accompanied by a swooping sound effect. Not only that, but this movie seems to have a darker color palette on the screen along with darker ranger suits. It kind of looks like Michael Bay’s “Transformers” in one way or another, which when I saw the trailer, I thought was gonna be a sign that the movie was terrible, but it just so turns out that the movie wasn’t as terrible as I thought it would be.

In the end, I was actually somewhat surprised by this film, when I first saw the original trailer to this film, I had rather low expectations, than as more ads came out, the movie continued to look better and better. Now that we are at this point when the movie has officially released, I can’t say I’m disappointed with it. In fact, I will say that kids who see this movie now, probably won’t say it sucks many years later. As far as the TV shows go along with the other movies, they are cheesy as hell. As kids, we love them, but as adults, we either question ourselves for loving them, love it and recognize its flaws, love it and don’t care about the flaws, or remember the times we watched this stuff when we were kids. Are there flaws in this movie? Sure, but they aren’t as prominent or embarrassing as the “Power Rangers” people such as myself grew up loving as kids. I’m gonna give “Power Rangers” a 7/10. I just want to say, this movie kind of reminded me of a combination of “Fantastic Four” and Sam Raimi’s “Spider-Man,” and I wouldn’t mind seeing a sequel to this if one is planned. As far as planned reviews go, I do plan on seeing “Ghost in the Shell” sometime soon, and since it is now April, I will be continuing my series of “Spider-Man” reviews with “Spider-Man 2,” which will be up sometime later during this month. I also might want to eventually take a look at “Mission Control: The Unsung Heroes of Apollo,” I heard according to a poster it won’t be playing anywhere near me, but I heard it will be available on many VOD providers so I can use that to watch it. Stay tuned for more reviews like those, and I also want to ask you a question. Are you an adult who still likes “Power Rangers?” I have nothing against people like that, heck, there’s a whole community of adult men who like “My Little Pony” and I’m OK with that! If you are, please leave a comment, maybe give some reasons why you like it, perhaps even your favorite series in the franchise! Scene Before is your click to the flicks! It’s Morphin time!