“Crawl” is directed by Alexandre Aja (The Hills Have Eyes, Piranha 3D) and is produced by Sam Raimi, who is known for directing various horror titles such as “The Evil Dead,” “Army of Darkness,” and “28 Days Later.” I also can’t forget to mention how he helmed all of Tobey Maguire’s “Spider-Man” trilogy. This film stars Kaya Scodelario and Barry Pepper as a daughter and father who live in Florida, a state known for the magic of Disney World, warm sandy beaches, and of course… stupid people. For all you old-timers out there, please search up “Florida Man” for more information. Anyway, the movie takes place during a massive, boisterous, category 5 hurricane. Throughout said hurricane, Scodelario’s character of Haley is trying to save her father, Dave. Simultaneously, Haley is trying to fend off incoming alligators.

Good thing this guy wasn’t in the movie.

When it comes to “Crawl,” it was never my most anticipated film of the year. I didn’t think it would be a modern day “Citizen Kane” or anything, but walking into this film, all I really asked for was a fun time. In fact, I almost expected “Crawl” to be somewhat similar to last year’s “The Meg.” Why? Because that movie seems to fit into that category of “summertime fun.” It’s a category that I would place certain movies that are not terrible enough to be dumped into an early month of the year, movies that in no way are going to win Best Picture, but they are perfect for witnessing simple, effective stories that can win an audience over for a period of time. The reason why I enjoyed “The Meg” so much is because it kind of knew what it was. It wasn’t trying to be serious the entire time, even though there were slight dabs of seriousness throughout. It just let the audience know that they were going to witness absurd fun.

Although I will say, “Crawl” is not exactly like “The Meg.” It’s got a bit more common sense put into it, but that does not mean it wasn’t good. In fact, one of the biggest strengths of “Crawl” has to do with something that I found to be a bit of a shocker. Specifically, character building. The entire movie hinges on the relationship of the father and daughter, two individuals who have great chemistry and play off each other very well in certain moments. I think the casting choices for both characters are top notch. Kaya Scodelario and Barry Pepper are a likable duo in a dangerous situation. There were several moments where I managed to root for them and hoped they would get themselves out of peril. As for the daughter, I could definitely tell she really cared about her dad from the very beginning. She really wanted to protect him. And this brings up an interesting reversal of a stereotypical thought I have. Because I know parents sometimes might say they’d do anything to protect their child, but here, we see the child trying to do the same, as if they were the parent, which really makes our main hero an excellently written character.

And one other thing I should point out about “The Meg” is that I occasionally refer to that movie as “what ‘Sharknado’ should have been.” And in some ways, “Crawl” is kind of like “Sharknado.” In fact, more so than “The Meg” because unlike that film, “Crawl” takes place during a natural disaster. But unlike “Sharknado,” I, again, bought into the characters, and when I look back at a film like that, I think it plays out with a tad too much seriousness than I would prefer for a film of its title. But here in “Crawl,” the tone is pretty much on par with what I would expect. Not too silly, not too gritty, just right. 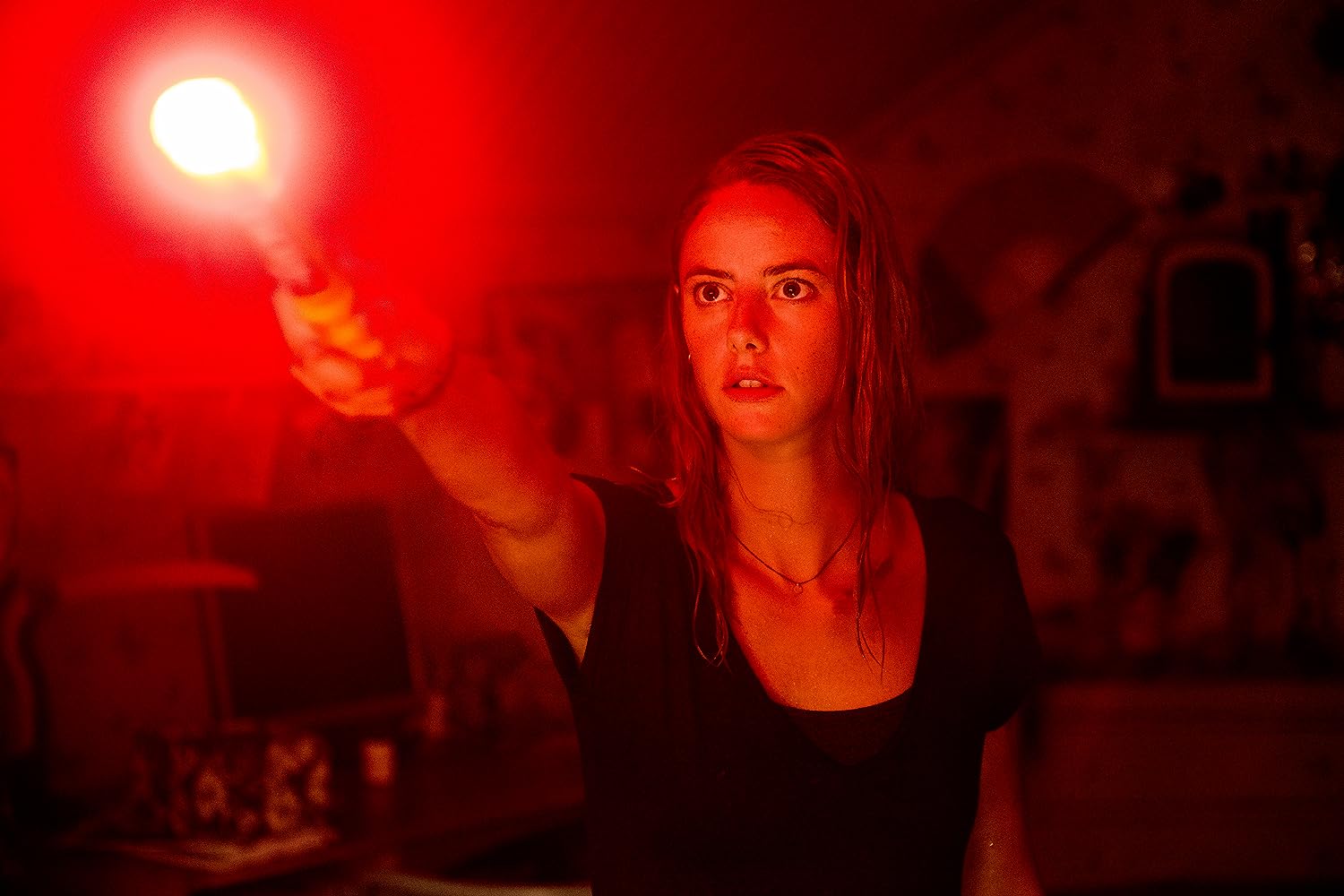 I must also point out that one of the main elements of the film is that the father and daughter not only have to deal with a big storm, but they also have to survive against alligators. A number of moments with these alligators are hypnotizing, full of tension, and it just makes you root for the two leads. And going back to the comparison with “Sharknado,” these alligators are not nonsensical. They feel legit, they don’t look like they were made for a PS2 game. They have a raw feel throughout the film based on their proper utilization. 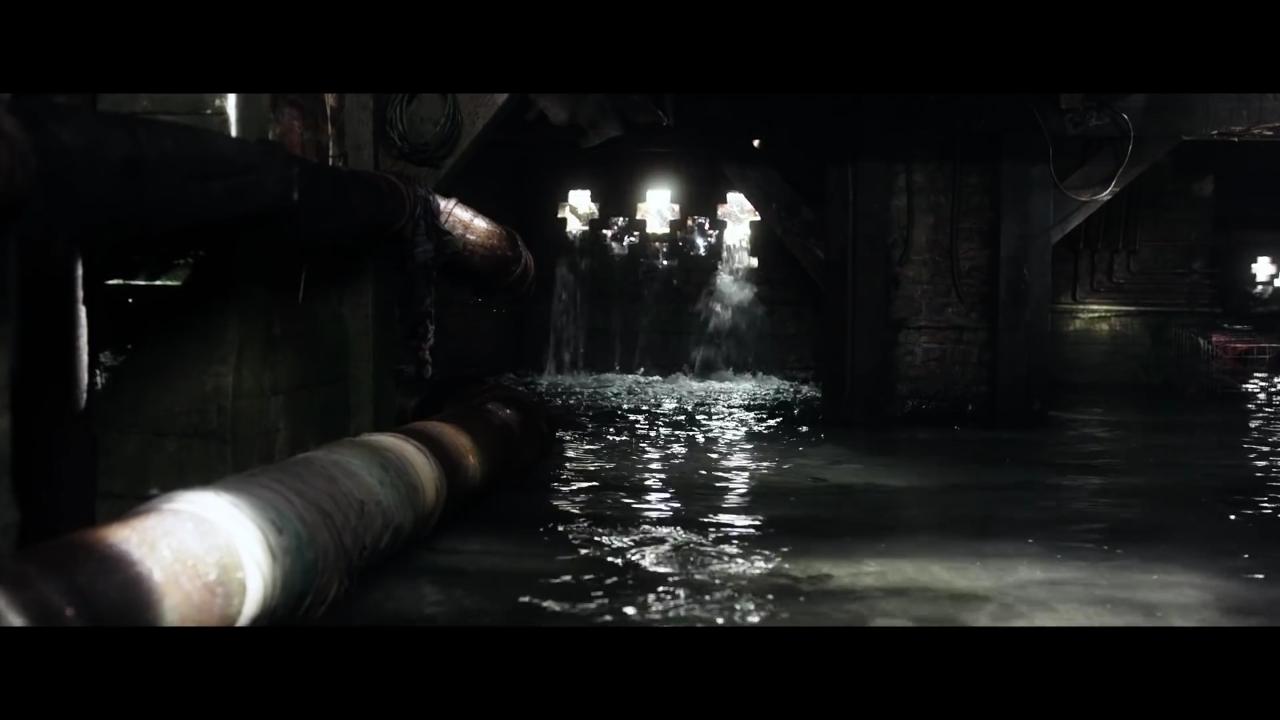 But I must remind everybody, this movie takes place in Florida, which does make sense because of the alligator appearances during the runtime. However, what does not make sense is the layout of the main house where all the s*it is going down. Why? I’m not saying it’s a bad house by any means. I’m not saying it is poorly designed or decorated, but what I am saying is that Florida homes don’t have basements. A majority of the film takes place in this house with a basement, where the alligators are coming in, water is making its way, nothing is very happy go lucky. I have never lived in Florida, I’ve been a few times, although I’ve never lived there. But I am willing to bet I can talk to almost anyone who lives in Florida, reach out and ask for a tour of their home, and if I asked them, “Hey, can I see your basement?” Some of those people might reply saying I’d probably need my brain checked. But you know what? I like to keep an open mind. So I did a Google search on this. From what I have gathered, it seems some people have pointed out that the practicality for a basement in south Florida is rather low, although it may be a tad more common in north Florida. With that being said, a majority of this film takes place in Coral Lake, which is the area of the main house. Let me just remind you that Coral Lake is in a southern area of the state. Maybe crawl spaces, as opposed to basements are a bit more common there than I would think, but this is still something I need to bring up. As of now, this isn’t going to lower the film’s ultimate score, but even with that in mind, as a guy who lives in Massachusetts… I have questions.

Speaking of questions, let’s talk about the film’s ending. Now, this is spoiler free, but I want to point out that this film ends kind of abruptly. This film is 87 minutes long, and I can see why. I have a feeling that either the two people who wrote this film, the director, or the studio wanted this film to be less than an hour and a half in runtime. And at some point, one person thought in order to guarantee a “satisfying” runtime, someone said to just end the film at whatever point could be imaginable. It kind of reminded me of “Transformers: Dark of the Moon,” which is much longer than “Crawl,” in fact it is around two and a half hours. But that film, just like “Crawl” ended in a way that kind of felt rushed. It didn’t make me angry, it just took whatever excuse is possible in order to get to the end credits lickety-split. I was just like, “Alright, that happened.”

In the end, “Crawl” is a fun movie to watch no matter how rainy of a day it is. I felt the chemistry between the two leads. I was able to get past my questioning of reality in Florida. And while it is no masterpiece for the ages, “Crawl” will definitely stand as an appropriate summer movie. Overall, it’s a good time. I’m going to give “Crawl” a 7/10. Thanks for reading this review! I just want to remind everyone that next week I will be going to see “Ready Or Not,” which is a movie about a recently married woman who must partake in a game of hide and seek in order to be part of her new family. I just got passes to an advance screening, and my hype levels are VERY high for this movie right now. The Red Band trailer for it is up there with the best trailers I have seen this year, so be on the lookout for my thoughts on the film! Be sure to follow Scene Before either with an email or WordPress account so you can stay tuned for more great content! And if it is a rainy day, one perfect activity aside from staying in and reading Scene Before, is checking out the Scene Before Facebook page! The Scene Before Facebook page is a great place to stalk the Movie Reviewing Moron before finding out if your friend likes your latest cat picture. Because CATS on social media are brand new! I want to know, did you see “Crawl?” What did you think about it? Or, do you currently live or have you ever lived in Florida? Tell me about it! Most important question though, if you lived in a home there, did it have a basement? I’m absolutely curious right now! Let me know! Scene Before is your click to the flicks!