“Hidden Figures” is directed by Theodore Melfi, who also directed the 2014 film “St. Vincent,” stars Taraji P. Henson, Octavia Spencer, and Janelle Monae, and is based on a book written by Margot Lee Shetterly which is based on a true story of three African American women working at NASA who had a vital role in the early years of the US space program.

Just a fun fact, until I saw the trailer of this movie, I had no idea who these three women were, and after I saw it up until the point of going to see this film, I did no research on them. I also didn’t even know about the book this movie is based on, I still have never read it to this day. Without further ado, let’s move onto some characters.

The first character which will be brought up is Taraji P. Henson’s character of Katherine G. Johnson. I thought Henson’s performance as this character was very well done and it is the best out of every character in the movie. The establishment of this character at the very beginning of the film couldn’t have been done better. When the film starts it shows Katherine as a young child counting numbers and seeing which ones are prime and it is basically a montage of how gifted this child is. It’s a nice introduction to an interesting character. As far as resemblance goes towards the actual person, it’s pretty close. The glasses are a little different and the same goes with the hairstyle. Halfway through the film, I thought Henson gave a moment that could be shown during award shows. I’m not saying that she gave an Oscar worthy performance, but I am saying she did a spectacular job with the movie.

Octavia Spencer is in this movie as well and she plays Dorothy Vaughn. Watching her in this movie reminded me of watching Viola Davis’s character in “How to Get Away with Murder,” and I will admit that may be a terrible comparison, because I only watched part of the first episode, but it doesn’t change the fact that thought came to my mind at one point. Out of three main African American female characters in this movie, I felt like she was the most bossy, and I mean that in a compelling way, not a bad way. She also gave a feeling at the very beginning that made me realize how sophisticated and smart she was. When she was fixing the broken car in the beginning that vibe kicked in, it was like I was looking at a master at anything and everything if you will, I don’t know if anyone else got that feeling but I did somewhat.

The last main character is played by Janelle Monae and she plays Mary Jackson. I have to say out of all the women here she was certainly the prettiest, not that it means anything. With that aside, her story about attempting to get into these classes meant for all whites was extremely compelling throughout the film. It also just made me think, the amount of schooling that goes into a job like this, it must take up a good portion of your life just to get even one position at NASA. Fun fact, I actually know someone who works at NASA’s Johnson Space Center in Houston, TX. According to their LinkedIn profile, the person I’m referring to has gone through “18 years of dreaming and dedication,” that’s literally how long it takes for someone to become an adult! My friend’s dream became a reality when I was 15 going on 16, so all of this dreaming and dedication began before I was even born! By the way, if you are curious, this person’s name is Kayla LaFrance, she’s a good friend of mine, and to stay on topic, she enjoyed “Hidden Figures.”

Now that we have the main characters out of the way, let’s move onto some other characters that intrigued me, starting with Jim Parsons’s character of Paul Stafford. This is not the first time Jim Parsons has played someone that’s related to the sciences, you may know him as Sheldon Cooper on “The Big Bang Theory.” Just to be clear here, Paul Stafford was not a real person working at NASA, instead, he was essentially a stereotype put in this movie meant to represent white engineers who worked at NASA at the time which this movie took place. When you first see him in this movie, you may think of him as a random engineer going about his day at NASA, but one thing I noticed as the movie progressed, his character became more moronic. Granted, there was one scene where Paul thought he was following the rules, and I won’t completely reveal what the scene is, but it was like watching a spoiled brat when he reacted to the outcome at the end of the scene. Now that I am out of the theater and writing this, I’m realizing something about this character that I didn’t realize while watching this movie. I just recently mentioned Jim Parsons plays Sheldon Cooper on “The Big Bang Theory,” in that show, he plays a theoretical physicist and he has a “Master’s degree and 2 PHds.” There is another character on the show, Howard Wolowitz, and he’s an engineer with a Master’s degree as his highest degree. There are multiple times which he is mocked by characters on the show because of this, including Sheldon himself. I find it hilarious because now, the guy who plays Sheldon is now playing the position on the show Sheldon was constantly making fun of.

*Also, little note on the image above, Kevin Costner is in this movie, but I wouldn’t say he’s worth discussing at the moment.* 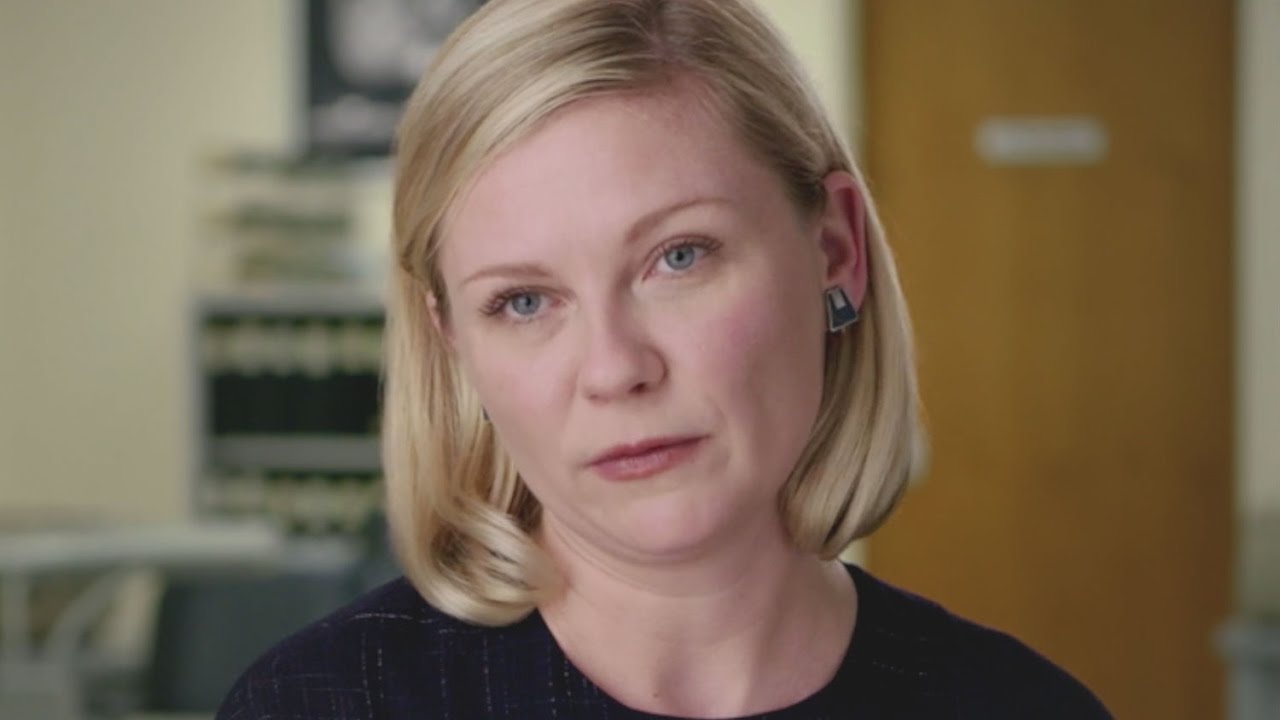 Kirsten Dunst is also in this movie and she plays the character of Vivian Mitchell, much like Jim Parsons’s character, Dunst’s is also fictional. The views of this character are meant to represent the views of some white women during the 1960s and I’d say those views were delivered quite well. She acted like she didn’t talk a s*it about much of anything for a good portion of the movie and that really added a bit to her character. If you take the boss from “Office Space,” make him a woman, and made him act wicked serious, you’d probably get this character. She also reminds me of a teacher I currently have if they were a woman, not to an exact scale, but there are pieces of the puzzle that connect to bring similarities between the two people.

Last but not least, I’m not gonna get too deep into it, but this movie also has a love story attached to it. Quite a few movies, including ones based on true events have love stories in them as a subplot, sometimes it doesn’t work (I’m looking DIRECTLY AT YOU “The Final Hours”) but here, I’d say it worked. Why? It was compelling, it felt realistic, and I cared enough about the characters.

Also, let’s talk about the backbone of the story, these three women were computers, or mathematicians. Now, I knew that a computer is essentially a slang term for a mathematician that doesn’t really get used much nowadays for this association, I learned that in a vintage episode of Jeopardy in 6th grade and I still remember it. But with that aside, watching these computers, it’s just awesome that people did what they did back in the day. Nowadays, you have computer machines and calculators doing lots of work for you, but it is really interesting to see these three mathematicians doing their jobs. I can kind of connect with these folks per se because I actually do a ton of mathematics in my head, and I much prefer doing it that way. I think calculators and showing your work are kinda overrated in some circumstances. I don’t know about you but that’s how I feel.

Last but not least, before giving my verdict on the film, I’m gonna go over one of the parts of the film that is more intriguing the longer I think about it. At one point about 15-30 mins into the movie, Katherine wonders where the colored restroom is, it turns out that there isn’t any colored restroom by her in sight. When she asked Ruth (played by Kimberly Quinn) where the bathroom was, Ruth wasn’t able to answer her question. It took a bit for Katherine to find one until she finally discovered a colored restroom in the West Campus hall. Later in the movie, it is eventually blurted out that Katherine travels half a mile just to get to this restroom. This just highlights the racial issues of the 60s. While we are living in a time which segregation and certain racial issues may be becoming more common than it has been in some recent years, this is important to keep in mind and it kind of makes the movie feel like it is really necessary to have come out at a time like this. 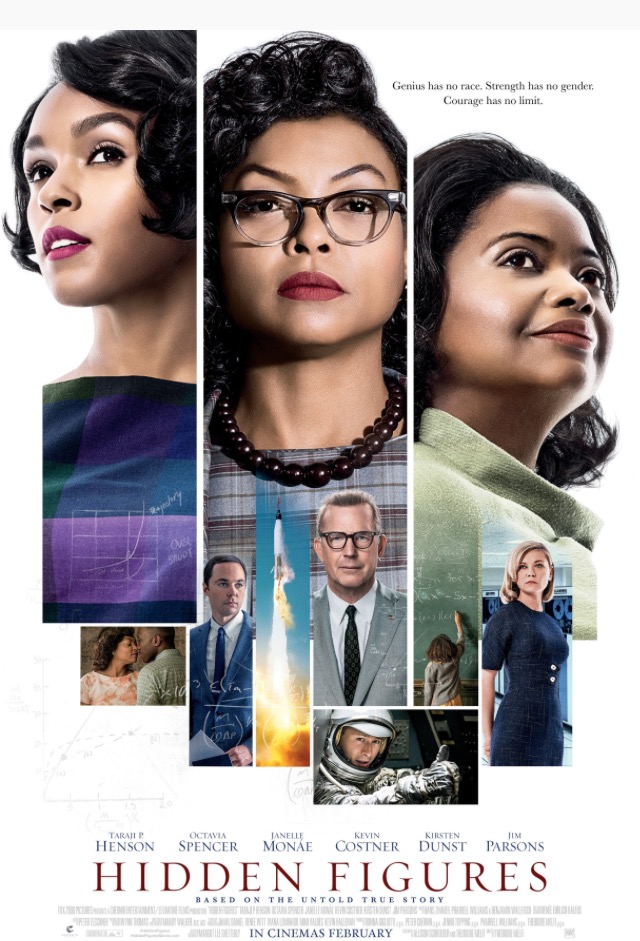 In the end, while I had no idea behind the backbone of “Hidden Figures,” I’m definitely glad I saw it. I enjoy movies that have to do with space, and while this movie had more of a focus of the characters who weren’t going into space, it most definitely worked for the movie and it made it all the more interesting. This movie may inspire people to work in scientific fields, no matter what gender or race they may be. I’m going to give “Hidden Figures” an 8/10. I almost gave this movie a 7, I’m having a really hard time deciding whether I should give this a 7 or 8, but I feel like this movie will be remembered by quite a few people. Maybe once I see it again I might like it more the second time than I did the first, I don’t know, but now I’m feeling optimistic so I’m going with an 8. This movie was not only intriguing, but it was also true, the fact that it is true doesn’t really bump my rating any higher, but it’s just fascinating to know that this movie is true, granted there are elements of fiction in here, but I’d say they were necessary as far as storytelling goes. Stay tuned for reviews coming soon because tomorrow I’m going to see “The LEGO Batman Movie,” it just came out on Friday and I can’t wait to see this and get a review for it out to you all. This is probably one of my most anticipated films of the year and I hope it is as good as everyone says. Stay tuned for that review and stay tuned for other reviews coming up as well. Scene Before is your click to the flicks!