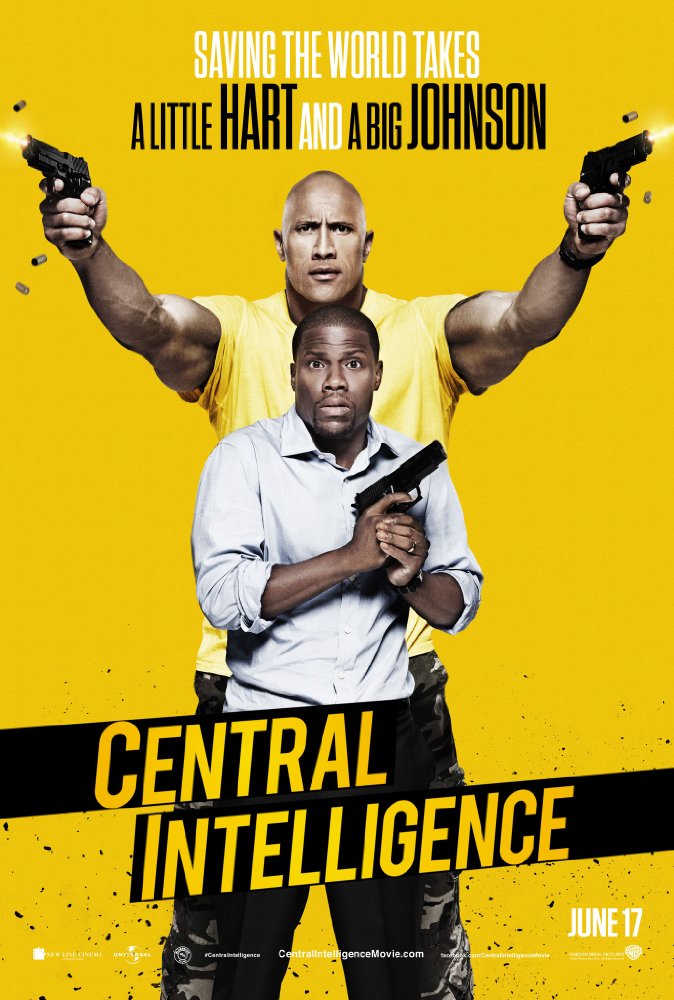 Central Intelligence is a film starring Kevin Hart and Dwayne Johnson. This film revolves around two guys who known each other from high school, but a little incident happened to the “then” Dwayne Johnson character, and it was hard to get back up from that. At the same time, Kevin Hart was voted student of the year, he was most likely to succeed, and he was probably the most revered person in the entire school. Keep these in mind when you see the movie. Eventually Kevin Hart is lured into working with Dwayne Johnson for his skills in accounting in order to save the US spy satellite system.

Years later, these two find each other on Facebook, Kevin Hart’s character doesn’t even know who this guy is, but Dwayne’s character seems to clearly know who Kevin Hart’s character is. Eventually they are both in a bar and they find each other. Dwayne Johnson looks like he lost a lot of weight, he shaved his head, and it seems he buffed up. Kevin Hart lacks hair too, and he was pretty much the same height he was in high school. It turns out that Kevin Hart, despite his success in high school, ended up becoming an accountant, while Dwayne Johnson became involved with the CIA. It shows a role reversal from high school to adulthood. It kind of reminds me of a stereotypical high school, where basically all the jocks are rewarded with praise, while the nerds remain at the bottom of the food chain. So when you look at Dwayne Johnson in this movie from high school to adulthood, it’s kind of like he had a “Revenge of the Nerds” moment, specifically when I refer to the speech at the end of the first movie. OK that happened in a college but whatever, the example works in my opinion. Although in that stereotypical high school sort of environment, Kevin Hart would probably be the one kid who liked everybody and was liked by everybody. He seemed like one of the popular kids that wasn’t actually a jerk.

As a duo, Kevin Hart and Dwayne Johnson work really well together. You can tell in a lot of the shots, based on the dialogue of the film, you can tell they were enjoying themselves. I actually happened to see bloopers of the movie, and it seemed like they were having a fun time on set. Throughout the movie there have been moments where I really felt the chemistry between these two. Like when they meet in the bar, it feels like what would happen if two long lost folks reunite.

There’s also a bit of action in this movie, which honestly was pretty good for an action comedy. The dialogue during the action scenes was pretty funny as well. There’s even a reference to Patrick Swayze in Road House that I couldn’t help but laugh to. Also during the action sequences, the people behind this movie did a fine job with establishing characterization and personality. This goes specifically with Kevin Hart, specifically where he says “I’m out.” This was recurring throughout one scene but apparently Dwayne Johnson doesn’t even listen to him. It shows the amount of fear he had throughout the scene, along with Dwayne’s dare devil personality. It kind reminds me of another action-comedy with Kevin Hart, specifically “Ride Along.” Kevin Hart’s relationship with Ice Cube worked in that movie because of the differences the duo had between each other. Although if I had to choose between the two duos, I’d choose the one in Central Intelligence. In Ride Along, Ice Cube at times seemed like a pretty bland character. Also while the two were different from each other throughout a good chunk of the film, it felt like at times that they were too different. Ice Cube seemed 1-dimensional in the movie for the most part while Kevin Hart’s character developed. Granted unlike Kevin Hart, Ice Cube wasn’t the main character of the film, but it’s still something I have on my mind. In Central Intelligence, both Dwayne Johnson and Kevin Hart develop in a way which I can approve. I felt like I can appreciate both of these characters because they were both friends before the movie gets serious, while Kevin Hart and Ice Cube in Ride Along for the most part didn’t seem too friendly.

Kevin Hart is also married in this film. His wife is played by Danielle Nicolett, and while watching the movie, the subplot between the couple was not the most necessary thing in the world (well, a good portion of it). Although I will admit towards the end of the movie, it felt kind of necessary and somewhat gave the movie a few extra points in my book, it was sort of humorous too. This subplot although brought a pretty funny moment involving Dwayne’s character, I won’t say what it is though. Although in the end, part of me feels like the plot played out the way it played out just for the cliche of the main character being in problematic relationship.

In the end, I like this movie. I recommend it to anyone who wants a good laugh. If you’re a fan of Kevin Hart you’re gonna love this movie. If you like Dwayne Johnson as an action star, or as a comic, you’re gonna love this movie. I actually went to see this movie with my mother and sister, they enjoyed it, and apparently my mother said she is the “new Mrs. Dwayne Johnson.” One scene made her think that, I won’t say what. I give Central Intelligence an 8/10. By the way, pretty soon I’m expecting to have reviews up for Warcraft, the new movie based on Blizzard’s video game and Independence Day: Resurgence, the sequel to the alien invasion film from a couple decades ago. Scene Before is your click to the flicks!